Dr. Wayne Dyer left his music for us all to enjoy - What a gift to the world! - Sunny Dawn Johnston
Skip to content

Dr. Wayne Dyer left his music for us all to enjoy – What a gift to the world! 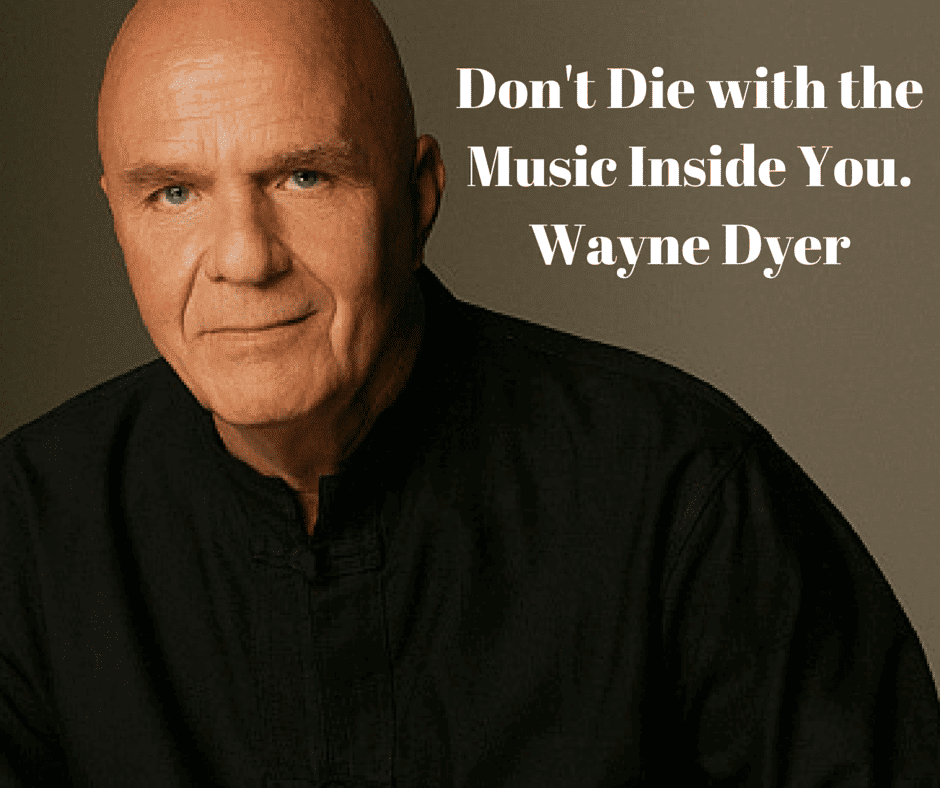 Yesterday afternoon, I was taking a break from working on a new project when I decided to scroll through Facebook. So much has been happening in the world, so much goodness, yet so much sadness… more than normal in my observation. Of course we were in the full moon energy too, so that usually heightens it all, a Super moon at that.
I read the news of two clients who lost family members, another whose dog was attacked, and several having serious health issues. As I read through them, I commented and sent love and light to each one… Sending them love, seeing them in their light and asking for their highest good. I always stop and take that moment to offer my love energy to their situation. It’s the one thing I can do…
After scrolling through a few pages, I saw a post that said that Wayne Dyer had passed away. It had been posted 9 minutes earlier. My head said NO, it’s not true… but my spirit knew it was. I read the post on his page, that his family wrote and I immediately felt the feeling. You know the one… when the wind has just been taken out of your sails, that sinking feeling in your heart, that air of heaviness that comes over you when you hear something you don’t want to be true. Yup, that was the feeling. Not Wayne… he is such a light in the world… not him too.

I met Wayne Dyer about 15 years ago at an event and was inspired by his talk. He was authentic, kind and funny as hell. A few years later, I was blessed to be his assistant at Celebrate your Life. I found him to be the same person on stage as he was off. Down to earth, caring, truly present in our conversations. If you read all the posts on Facebook, everything everyone has said about his character, I would agree with.. He was… simply put… an amazing guy. He would call himself ordinary. All who knew him would call him extraordinary. That is why we all loved him. At least that is one of the reasons…
I have many many reasons to love this man and all he stood for. The one that I keep close to my heart, and has had the greatest impact on me, is the way he was with the audience members and event participants. This man was a guru to many. People looked up to him, followed him across the country, read everyone one of his books, literally idolized him and felt like he was their best friend… but to him, everyone was an equal. I LOVED this about him. It echoes my own beliefs around teachers, guides and gurus. We are all equal. No better, no worse…. equal.
As his assistant at Celebrate your Life, I had the opportunity to spend quite a bit of time with Wayne throughout the weekend. I got to know some of his family and his dear friend and assistant. It was a gift for me to witness him privately, because I saw no difference between the man on stage and the man behind closed doors, which was heartwarming for me. It was a reminder to me of who I wanted to be in my life. How I wanted to show up in the world. How I wanted to be in my own budding speaking and teaching career.
With his fans, he was open, loving and interested in every interaction that I witnessed. He taught me how to be a gracious, kind, present author. He was a humble and loving teacher & speaker. He had no idea, and neither did I, that just 2 years later, I would be speaking on the same stages as he had… and that everything I learned, just from witnessing him, would become my intention. His impact on me that weekend was life changing. Not because of something he said, or something he wrote, or something he taught and he said a lot of amazing things… but just by being him.
One thing I remember so clearly from that weekend was that he had a ballroom full of people at his keynote speech. I don’t know the exact number but lets say 2,000 people. When it was over, he signed books and things, as most authors do. The line was at least 1000 people deep. People waited hours… with books in hand for him to sign, cameras to take pictures with him, notebooks of memories and things to show him, stories sitting on the tip of their tongue to share with him.. and they waited patiently. People simply wanted to THANK HIM for changing their lives. This went on for hours… and I know it has likely been repeated in every venue, in every city, at every event he has spoken at. That wasn’t the amazing part. What was amazing was he insisted that he stay until every single person had the opportunity to have a few moments with him. This was hours and hours of his time. He didn’t have to do that. It wasn’t required contractually… or maybe it was. Maybe his spirit signed up, contracted, to be one of the greatest teachers this world has ever seen… just by being who he truly was. Yup… I think that is it!!!!

That experience changed my life forever. He taught me about dedication, commitment, humility, kindness, integrity, and love. There is so much more I could share, but I will end with this.. As Dr. Wayne Dyer once said:

“Don’t die with the music still inside you. Listen to that intuitive voice and find what passion stirs your soul.”

Love and Light to you Wayne Dyer. A new bright star now shines in the sky instead of on the earth. Thank you for sharing your music and teachings for us all, so that we too can shine our lights brighter and brighter each day. – Sunny Dawn Johnston
I’ve shared some of my favorite quotes by Dr. Wayne Dyer below. I’d love for you to share your memories of him in the comments below… or your favorite quotes. – SDJ
If you enjoy this blog, click here to receive it in your inbox each time a new one is published: https://sunnydawnjohnston.com/blog/subscribe-to-my-blog


PrevPreviousName something you are grateful for that starts with the letter A
NextAre you ready to get rid of the drama?Next

30 thoughts on “Dr. Wayne Dyer left his music for us all to enjoy – What a gift to the world!”

What Did You Think About This Blog Post? Cancel reply

Keep in touch with me and what’s happening in my life and I will give you a FREE gift!